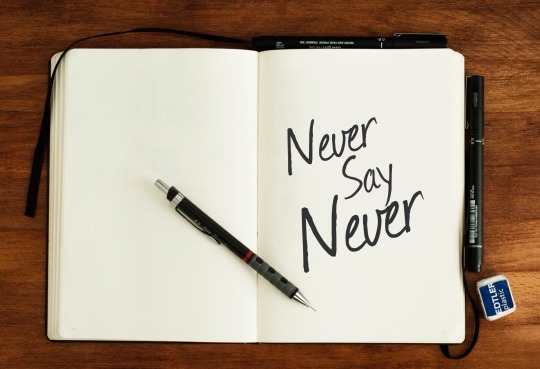 Our Americana is loaded with colloquialisms, catch phrases and well worn sayings. Depending on the region in which you live, some are used with more frequency than others. Being from the South, we tend to have quite a few unique sayings that are all our own.

Most of these sayings have a genesis in a particular time, place and set of circumstances. Yet, to this day, are easily applicable to many of life’s situations. Whether someone is “barking up the wrong tree”, finds themselves “between a rock and a hard place”, or simply want to “get down to the brass tacks”, our turning of common phrases help us communicate in our own American version of code.

However, there is one common saying, which seems to be held with a degree of reverence, that I have contention with…Never say Never.

You know what? I’m revolting against “Never say Never”. I want to start a revolution of sorts. We live in a Christian culture saturated with a brand of humility that is not godly, but rather is more confident in our likelihood to blow it than in God’s ability to keep us from falling. Am I immune to the human condition? Am I removed from the waring of the flesh against my alive in Christ spirit? The answer to both is no, but I have yet to find any benefit to making a negative confession about who I am and who I am going to become. I am so over a poverty stricken gospel where we believe humility is assuming the worst about ourselves and hoping for the best. Humility has absolutely nothing to do with wallowing in our base nature. We almost precondition ourselves to falling by leaning into this false brand of humility. I can hear the condescending tone rolling off the lips of those who advise “Never say Never”.

Today, I am going to say “never”. I am fully aware of “but for the grace of God there go I”. Grace and mercy aren’t lost on me, but I am confident enough in both I want to make declarations of faith and hope over my life instead of declarations of fear, pessimism and defeatism.

I will NEVER have a moral failure and lose the ability to carry out my assignment.

I will NEVER walk out on my kids.

I will NEVER be unfaithful to my wife.

I will NEVER get a divorce.

I will NEVER mishandle ministry finances.

The list could get lengthy, but I will stop there.

I have friends who have lived out all of the above. Even typing those statements creates tension in me because I don’t want to wound their souls. I have deep compassion and mercy for those who have endured the pain of the situations above…even for the ones who have committed the offense. The only thing that made me pause in posting this particular blog are those friends who have lived this stuff. I love them all, probably more so in their failure than before. This is not a statement of hubris. This is not religious arrogance. This is a positive confession over my life. This is a pronouncement of faith and hope. This is a declaration of victory.

If you want to wag your finger at me and say “now, now Jeremy”, feel free. I certainly respect your right and understand where you are coming from, but you will not coax me into a negative disposition or a toxic confession. As I said earlier, many of us are more confident in our ability to mess things up than we are in our ability to walk with integrity and character. I know where I am going to place my confidence…I’m saying “Never”.